Walking around in Azteca brought back memories of an extremely funny TV Show that came onto our airwaves in 1991 and lasted until 1994. It would deal with important issues in a funny way. 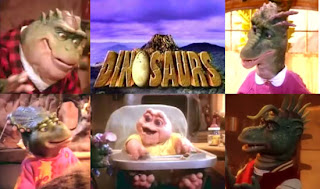 It was a hilarious sitcom all about Dinosaurs living just like us with TVs, Ovens, etc etc. Humans in this world were just pets or wild animals to them. Earl would go off to work to earn the pay for the family while his wife, Fran, would take care of the house.
They also had two older children, Robbie was a jock in High School and Charlene, a typical female teenanger who thought about boys and nail polish. They even had a crazy, funny grandmother who dropped by once in a while.
And last of all, Baby Sinclair, who was the center of the family and bought laughter with his crazy antics. He is the youngest of all in the family and his favorite weapon is the cooking pan. Literally LOL!

Yea I'm the Baby, Gotta Love Me!
The Making of Baby Sinclair

This series is now on Netflix and sold in Box Sets if you're interested in watching the entire series.

Guide to Kroger/Safeway Pet Jewels- including Videos! By: Update! The $10 and $20 Pet Jewel Cards are now available at Gamestop.com ...