New Year is almost among us!
What will you, my dear reader, will be committing towards?

1) Finish all of the pet projects that I have been lagging since last year
(I’m a pet enthusiast but the holiday season & family members coming over is no joke.I bet
some of you are already in the same boat. No worries! You’re not alone! As some of you are reading this,
I will be in Time Square New York getting all squished waiting for
that crystal to drop! Hehe)

2) Quest till I drop dead
(Admit it, we’ve all been there~. I love the storyline, the graphic arts, and battling all the bosses but we can all agree questing takes time. Some of us just don’t have that. It’s alright though! Don’t forget to take a break from time to time! Who knows...Maybe you’ll have a new world coming out when you get back~)

3) Farm all the things I said I would
(Oh boy, I hate admitting this one. I tell myself I’m going to come onto the game tomorrow to far mirror lake for my elegant gear but when it’s time, I just tell myself, ”It’s ok, I’ll do it tomorrow”. Let’s take up the challenge, shall we? If I can keep myself from procrastinating all year long, I will start eating my veggies. I will regret this challenge if I lose for sure….oh no.)

(I completely understand if you don't agree, no worries, I respect everyone's opinion. As time passes, most of us are often on our phones, laptop, or some form of technology that is driving us away from our loved ones, let's not forget to come back to reality from time to time! I know how this can since there has been this mobile game that I've been so addicted to as well. If I can do it, I promise you can do it too!)

5) Make new friends and most of all, have fun
(These past months, everything from life to game and social has been hectic with all the drama. It’s time to start a new book of 2019, not a chapter. Let’s all be friends and forgive those who did us wrong before. Don’t forget to enjoy life because you can never take back time so let’s live now and never regret!)


That’s about all I can come up for now….


What are some your commitments that you've planned? Let me know! I'd love to hear it!

Wishing you all a Happy (early) New Year!
Cheers to welcome a positive and prosperous 2019 to all!

Wizard101's 10th Birthday year is coming to an end, but before it does, lets have a look back at the entire year of generous Member Benefits that we received!

For the first time ever, Wizard101 gave us WEEKLY member benefits to celebrate the Big 10! Have a look at this impressive list! 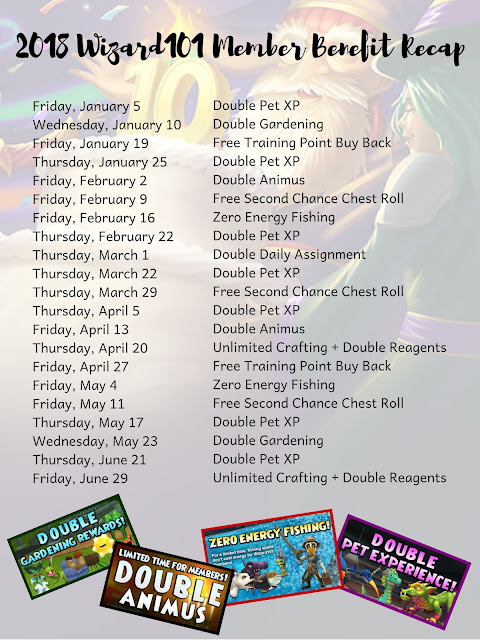 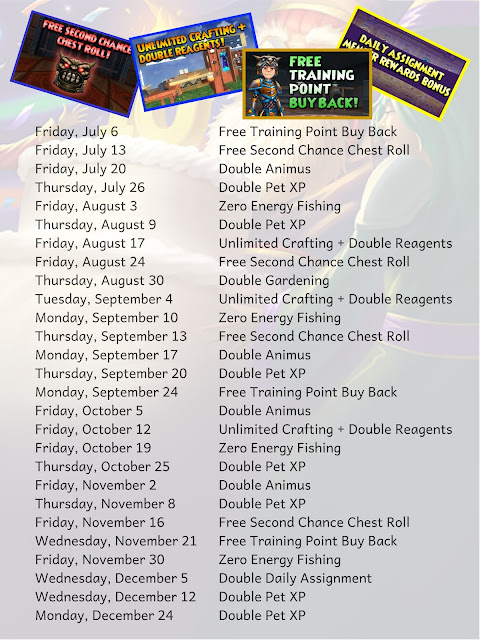 Happy 10th Birthday and Merry Christmas, Wizard101!
Thank you for an amazing year!

In Search of Designer Gear

Now that a lot of us have completed Empyrea Part II we are back to going over our individual lists of must have gear to spend our days farming for. I have just the solution for you if you are searching for some school designer gear you want to stitch to that new Paradox set.. This article is from the viewpoint of a maxed out wizard but you can see for yourself anyone that can gain access to these areas will want this gear also!

Some of the best places to farm for this school designer gear  is dropped by bosses throughout Marleybone, Moo Shu and Dragonspyre, worlds long past in the Wizard101 main storyline. The gear I'm covering in this series is focused on school specific designer hoods, robes and boots. .
Gear you can subtly rock your school colors with to achieve mass appeal. Bosses a max wizard will be able to solo with ease.
Excuse me for jumping around worlds, this series is not in any particular order.
Part One in this series will cover Yakedo in Crimson Fields, Moo Shu,  Oyotomi The Defiler in Village of Sorrow, Moo Shu and Spike the Crusher in Big Ben in Marleybone,


First up Yakedo, literally a must farm boss, there are a lot of different items this boss drops. 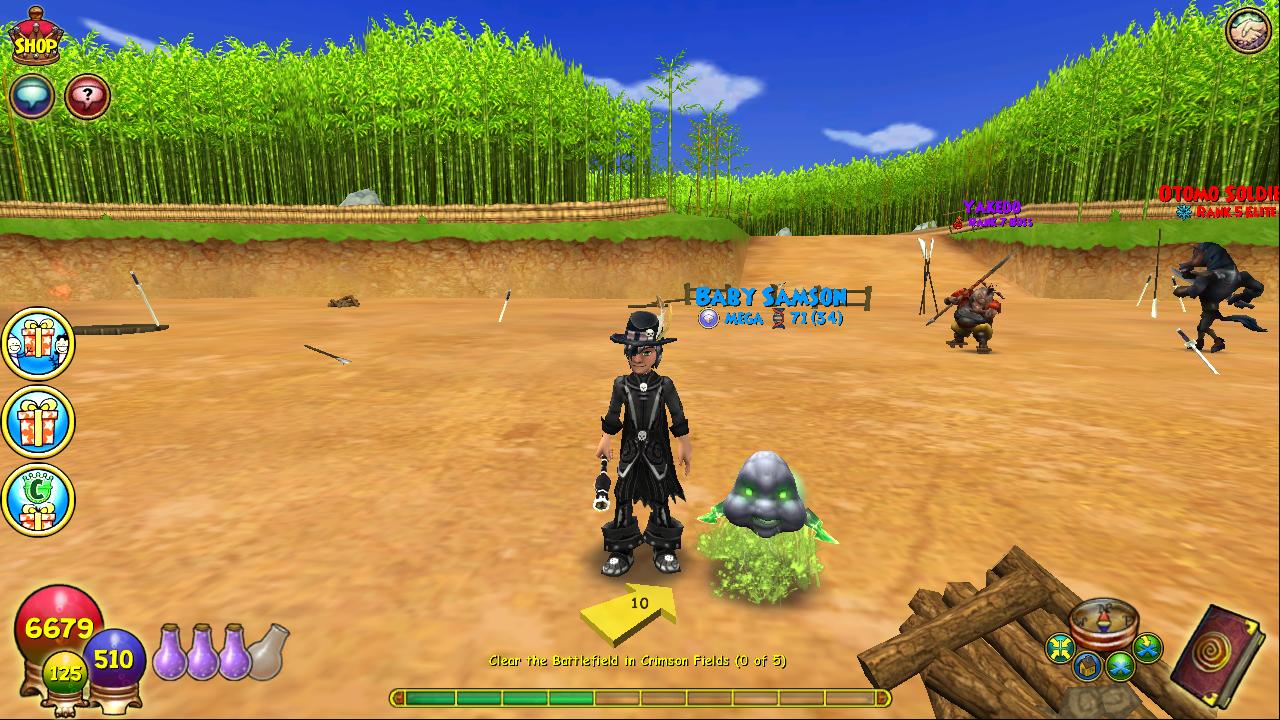 To get started, from the Jade Palace head towards Hametsu Village and use the sigils to enter Crimson Fields. 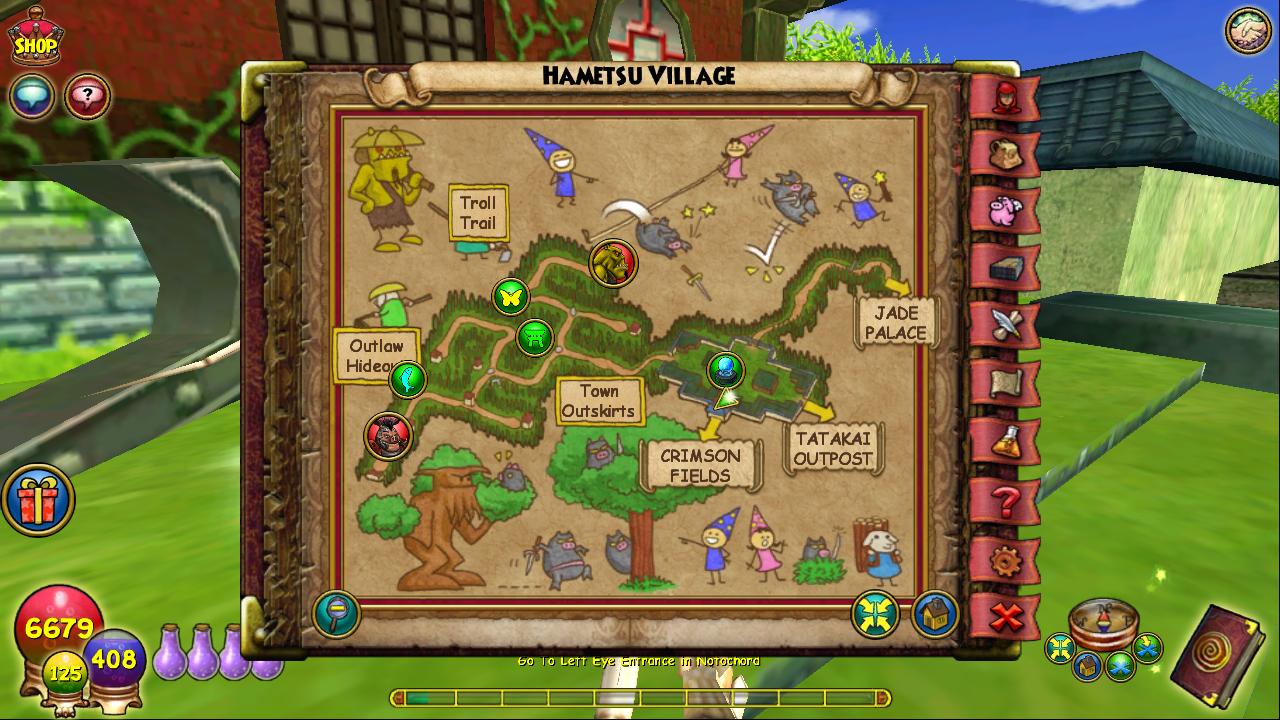 Here is the key to summoning Yakedo: Speak with Hoi Mang then enter the battlefield and raise the 4 Banners. You need to raise these banners before moving on in the dungeon otherwise Yakedo will not appear. 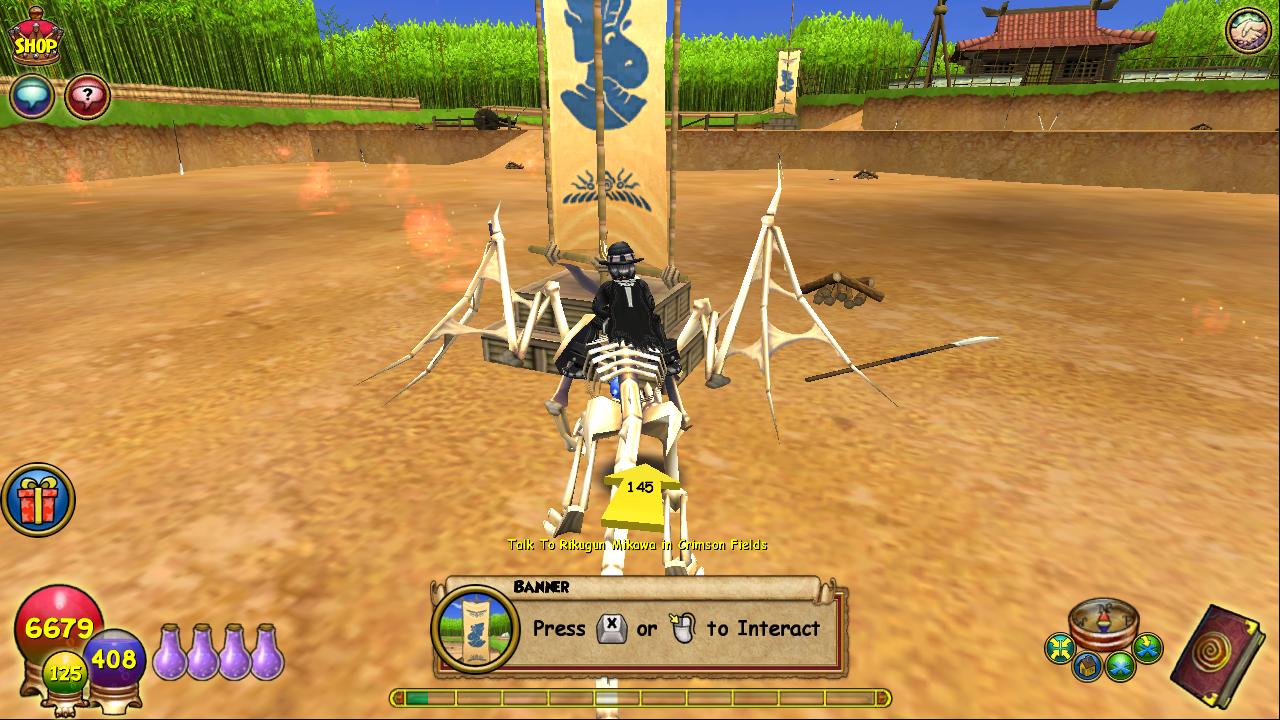 That done, continue on with the dungeon line quest. Yakedo will appear on the Battlefield when you reach the point that you need to clear the battlefield of 5 opponents.
Yakedo is a Rank 7 Boss with 5000 Health so poses not much difficulty for teams or high level solo wizards. I do not usually go any farther then the Yakedo fight since I see nothing that the last boss, the War Oni drops. I can solo this on my level 125 death in about 5 min. The drop rates in here seem above average compared with other bosses worthy of farming. With a team of 3 friends we noticed, on average, that one of us got something almost every run.
From a designer clothing perspective this boss is a gold mine of gear for every school. Just for example he drops a Myth School Hypothetical Helm & Hypothetical Robe, a Storm school Yakedo's Shroud and an Ice school Yakedo’s Rational Cloak. 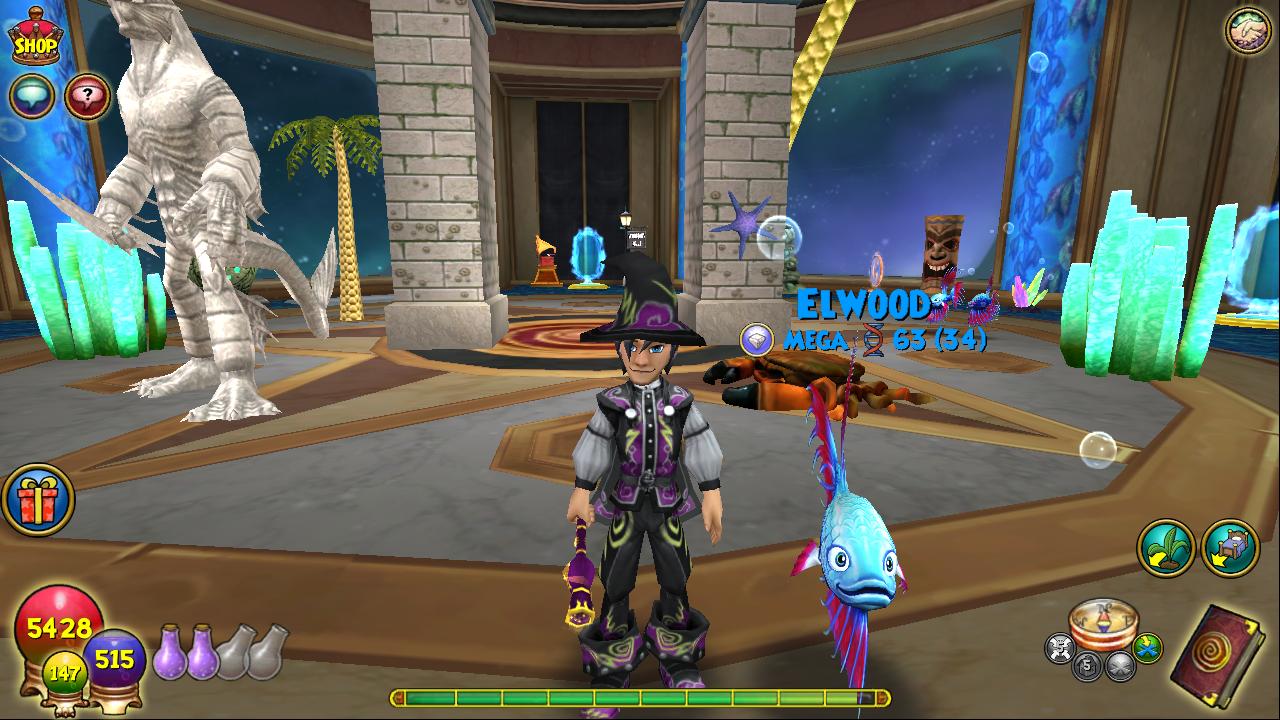 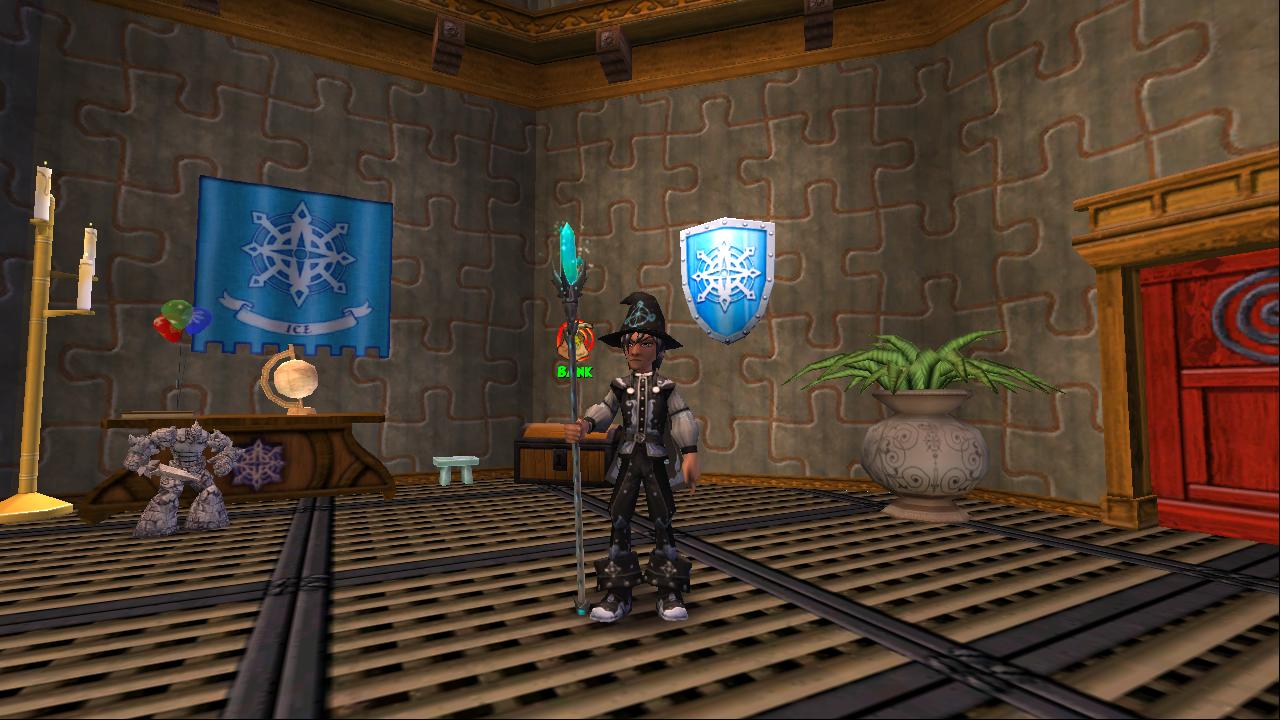 Ice school: Yakedo's Rational Cloak
You can only be so unique with the options we are given to dress our characters in but if you shop around and use your imagination you can mix sets up and come up with your own signature look.
This next boss will give you other options when it comes to signature gear. Head out to the Village of sorrow and check out
Oyotomi the Defiler
Rank 7
Health: 2300
School: Death
Location: Village of Sorrow
Farming rating: 3★
I give this character a 3 because there isn’t really that much he drops outside of the Storm Hood. 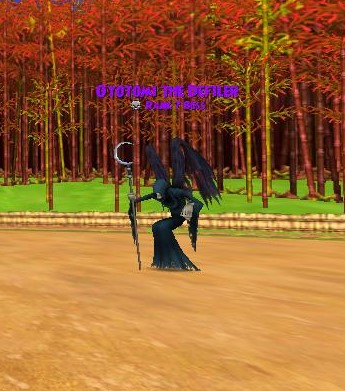 From the Jade Palace head over through the Yoshihito Temple and out to the Village of Sorrow. 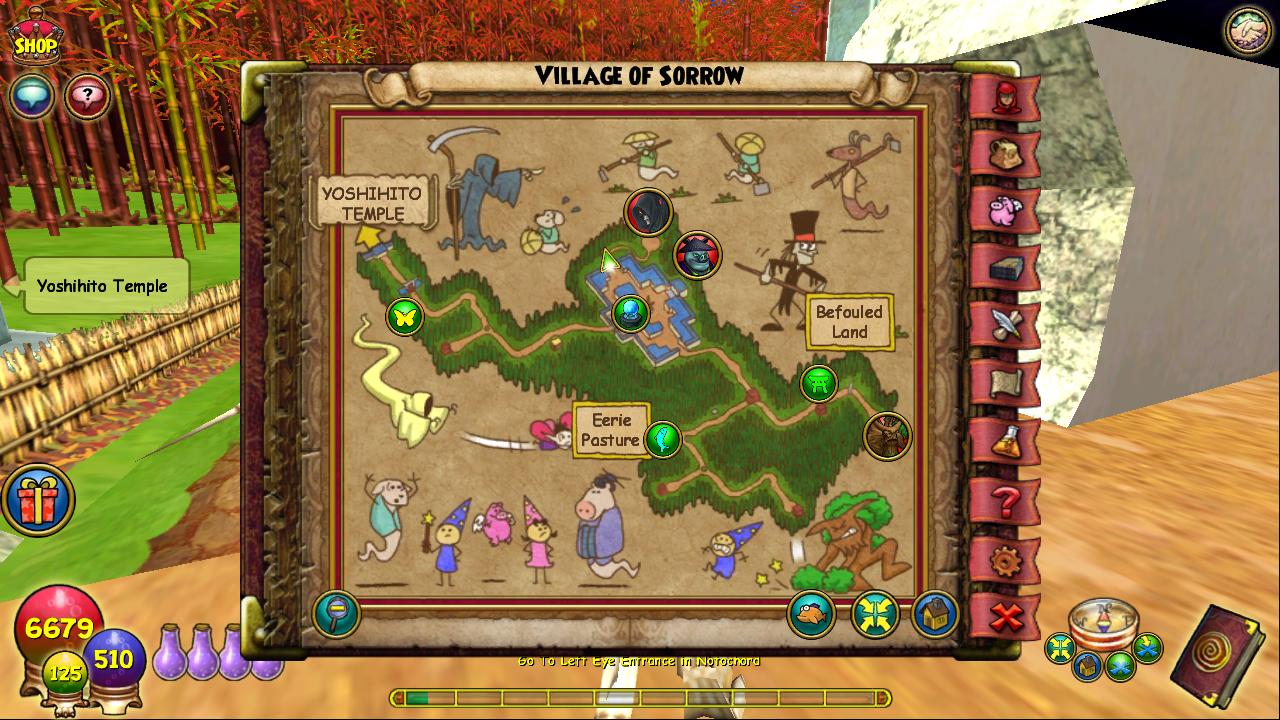 After you pass Wei Pei in the Village of Sorrow continue down the path to the right of him until you find yourself in a courtyard at which point Oyotomi the Defiler will appear. This is a simple enough Boss to fight and re summon. After you defeat him go back down the path about half way and turn around and return to the courtyard and he will re appear.
Not a lot of designer gear but he does drop the Storm school hood Oyotomi’s Cowl of Vacancy. 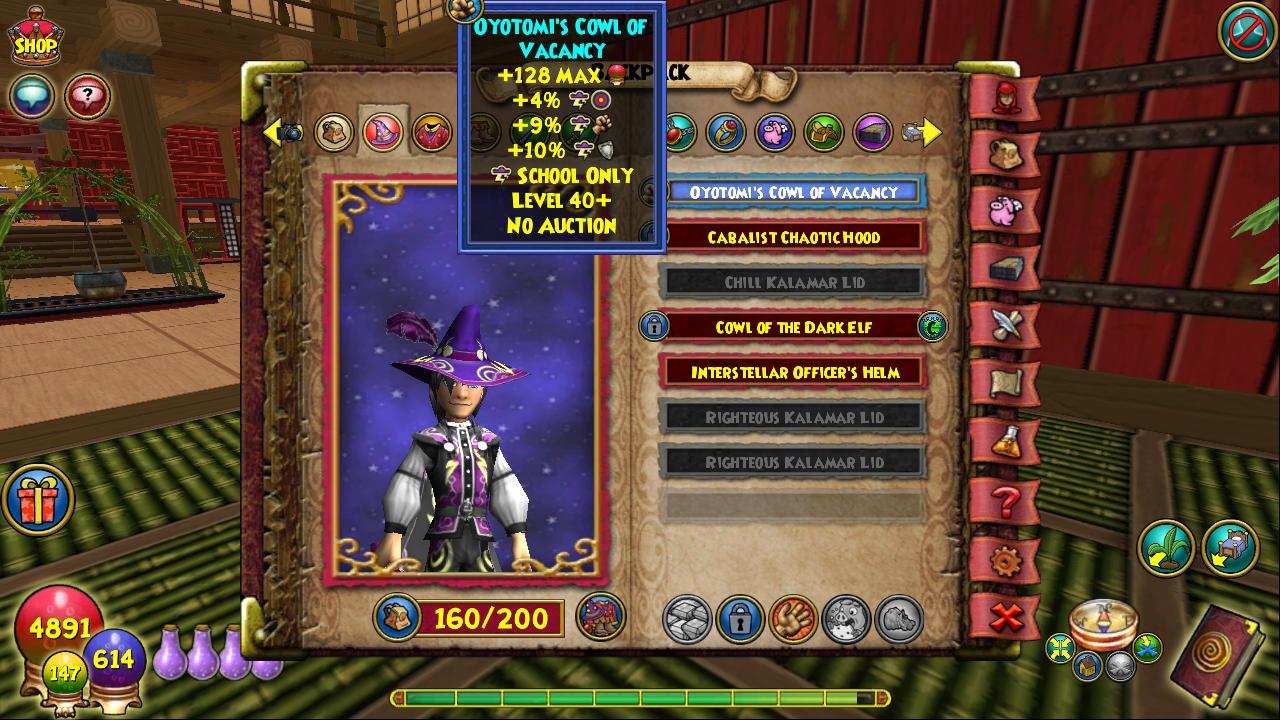 
On to the last boss for part one of this series
Spike the Crusher
Rank 7 Boss
Health: 3500
Farming rating: 5★
Drops the Death Robe, Crusher’s Deathly Robe among many other Designer Hoods, robes and boots
You encounter this Boss in the Big Ben Tower in Marleybone after you knock over the 3rd milk bottle. Make sure that you have knocked over each of the milk bottles on the way up to summon this boss. This boss drops one of my favorite all time robes, the death robe mentioned above and a lot more. Definitely worth spending some time farming. 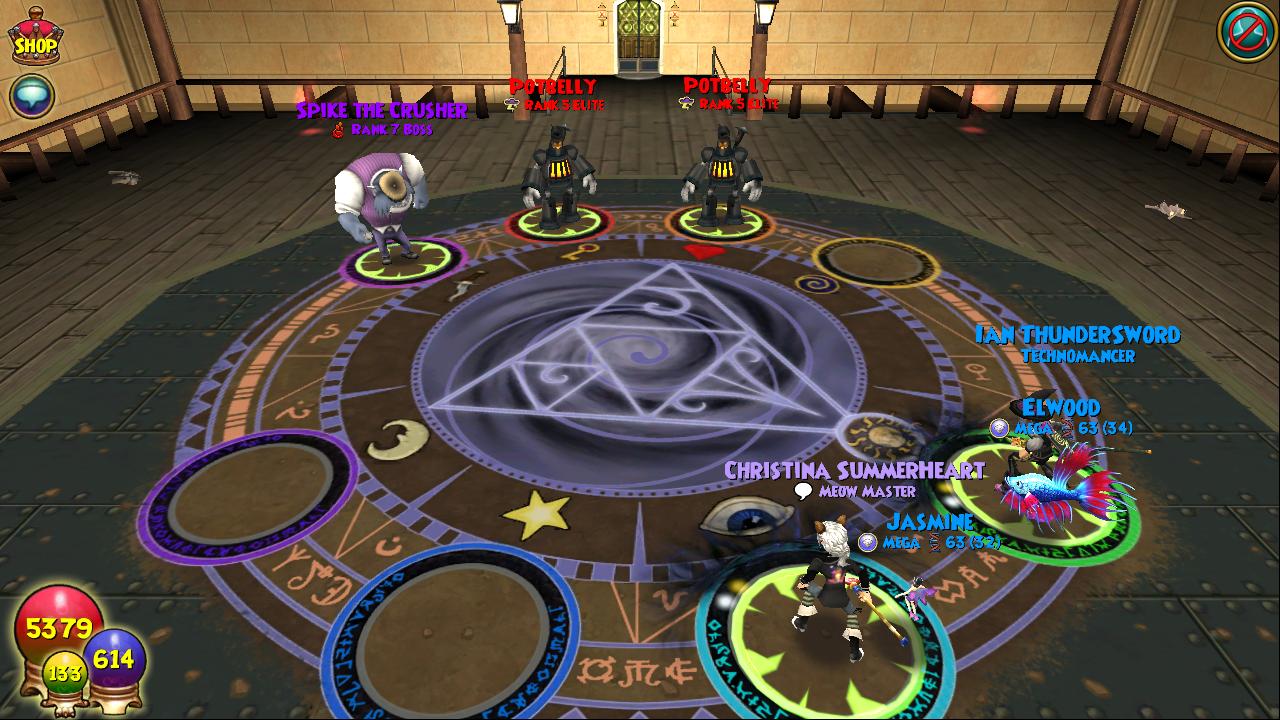 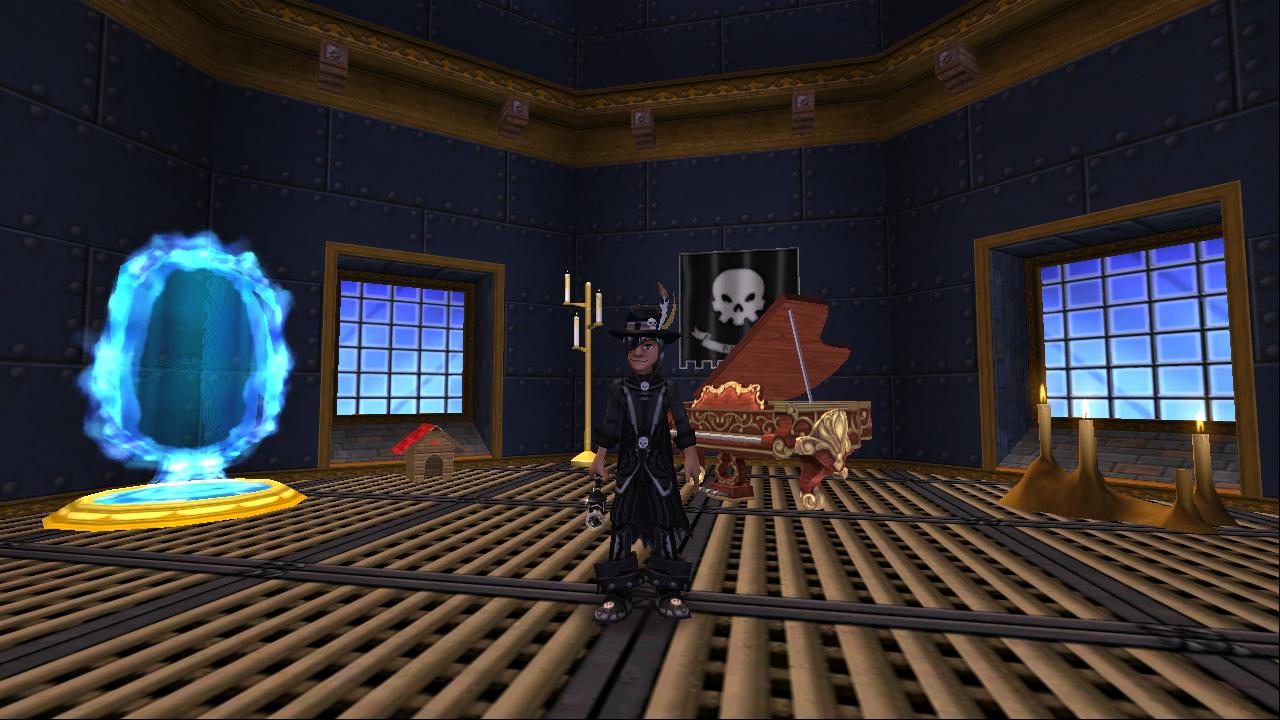 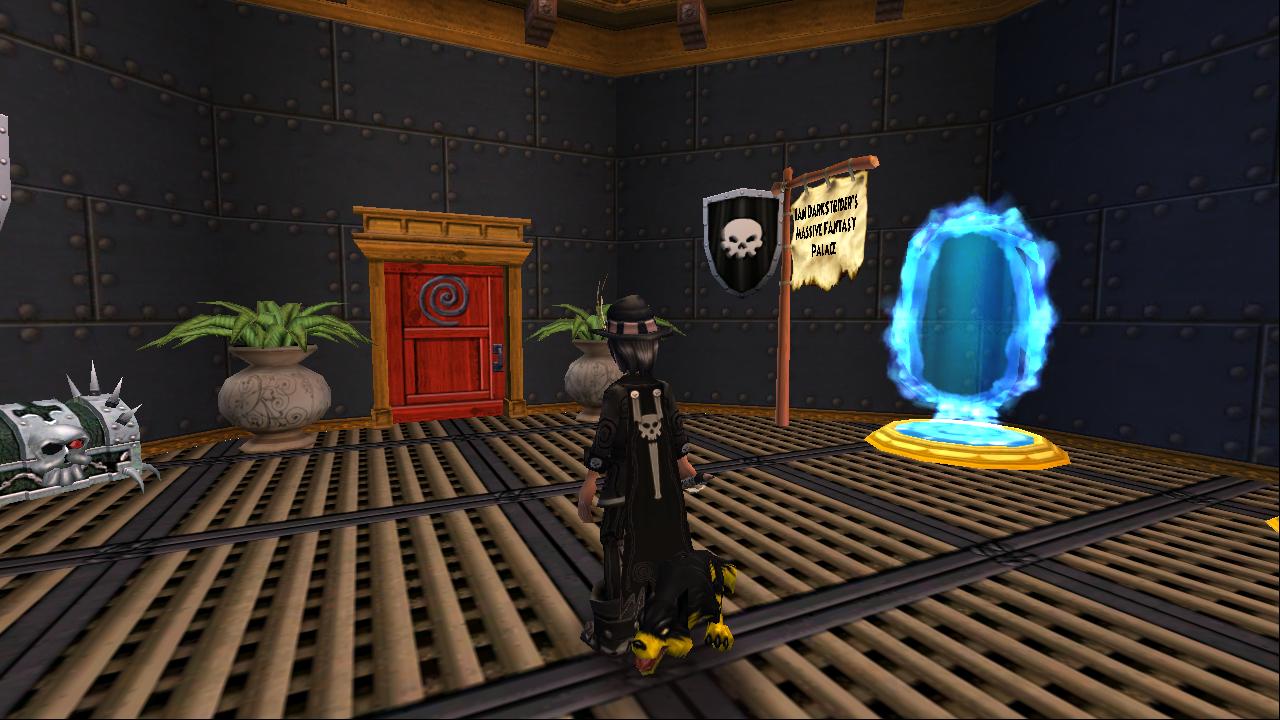 Crusher’s Deathly Robe
There’s so much more this boss drops I am still farming him so don’t be surprised if you run into me, I'm usually in Wraith Realm whatever I am doing. See you all next time when I cover more bosses in part II of this series. Until then may your dreams come true. I plan to update this post with more information on the gear that all these bosses drop as I get it. Until the next post I wish everyone a nice holiday season, enjoy whatever you do with whoever you do it will to the max! Take care of each other we are all we have, peace!


I know this post would work better at the beginning of December, but I got caught up in the finals whirlwind. I'm sure a good portion of you know what I'm talking about - finishing up classes and studying for finals or midterms. It can really take up someone's time.
Although, here is no time better than the present, and I'm not talking about the kind that's wrapped up with a pretty bow under the tree. 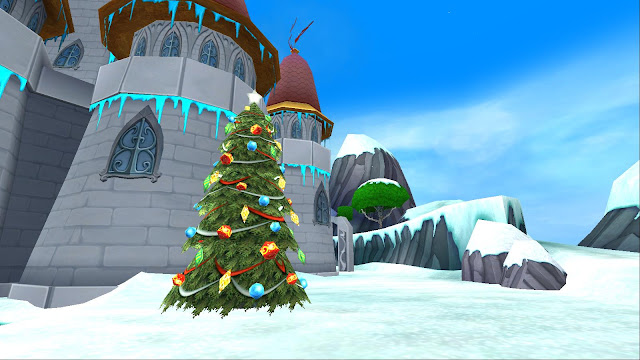 The Yuletide season always brings something to the Spiral. Whether it's a gingerbread horse or a four player mount, we always look forward to something new in the Crowns Shop. Not only do we get something new but we also get something old, such as Felix Navidad gracing the Shopping District with his festive presence, or Krampus coming over to give us a challenge while burning our skeleton keys. 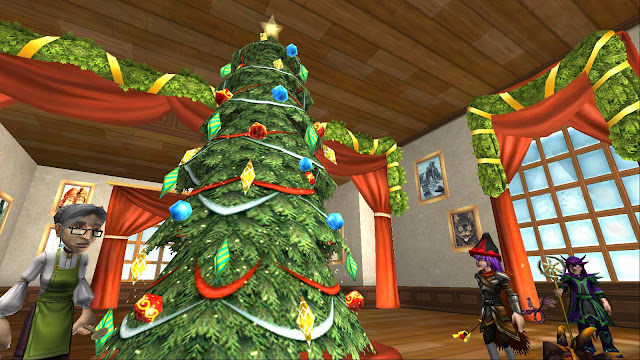 No matter what we get this festive season, there is always enough room to bring in some more cool, fun stuff for us to do in the Spiral. I took to Twitter to ask fellow wizards and witches what they would love to see be added into the Spiral festive season (hopefully next year *winkwink*)

Chrissy and Momo seem to be sharing the same thinking cap...Or should I say Santa hat! It would be really cool if we were given the option to wear a plain simple Santa hat that girls can wear and that boys can wear without the beard. As well as our faithful companions getting in on the Christmas spirit as well! Can you imagine how adorable my Snowhopper bunnies would look in little Christmas hats?! 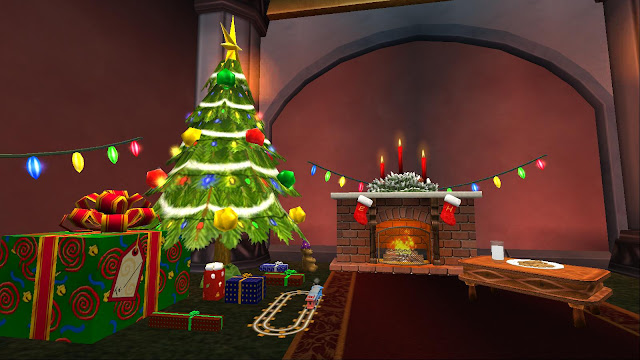 Although the holiday festivities are nearby and with the year coming to a close, I just hope that you guys have an amazing holiday that would can cherish with the people you love. Make sure to be kind to one another and share as much love as you can give out. Also, keep an eye out for Santa and make sure to leave some milk and cookies for him!

What's In The New Gingerbread Pack?!

Gear Stats updated as of July 2020 (Summer Update)
By: 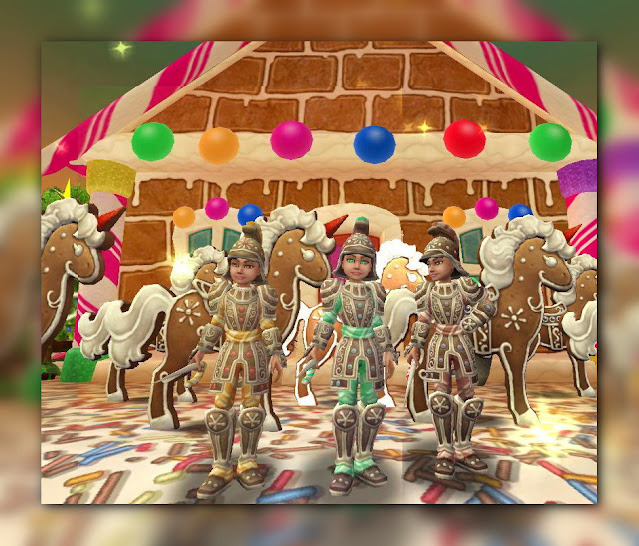 
This pack contains 5 different gear sets.  It features the Karamelle, Peppermint, and Minty Fresh Gear, as well as the Snowdrifter's Energy Gear. 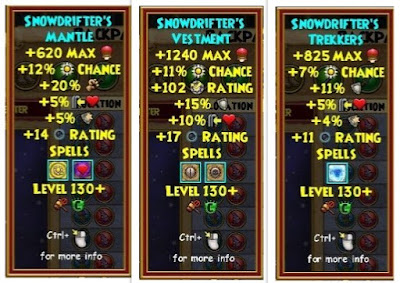 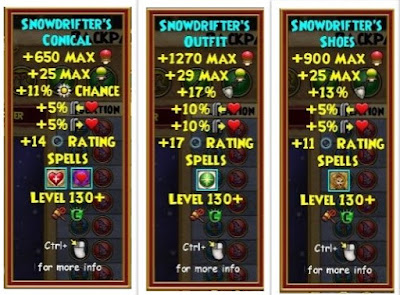 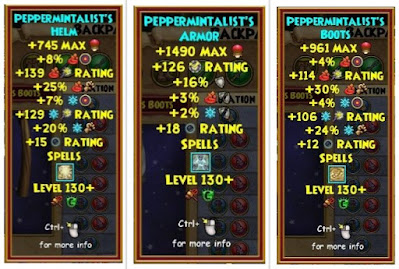 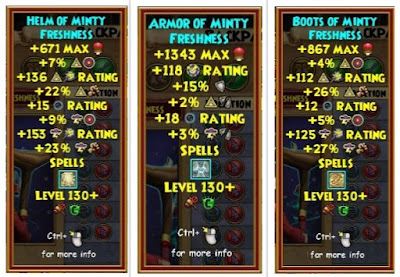 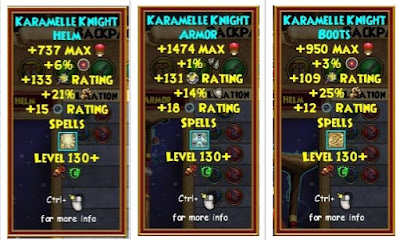 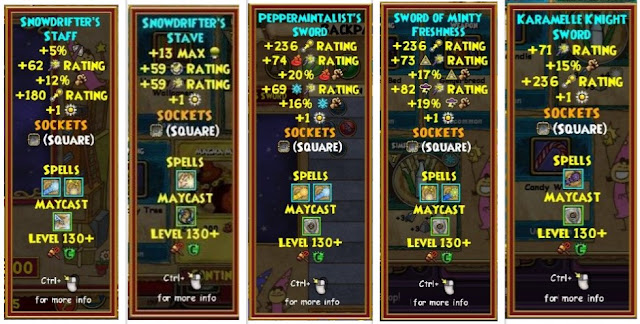 Credit and many thanks to @CarlLewis7133 for sharing his Snowdrifter's Stave wand photo.
Other Gear
Santa Hat
Santa Robe
Santa Boots
The Snow Crown
The Winter Antlers
The Frosted Tips

7 Day
Wolf of the Winter 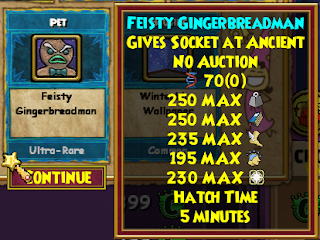 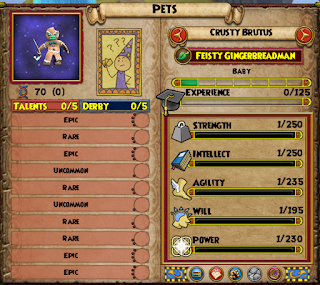 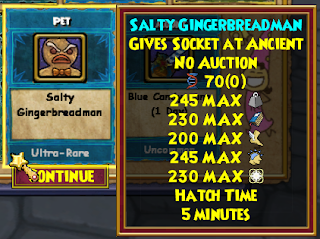 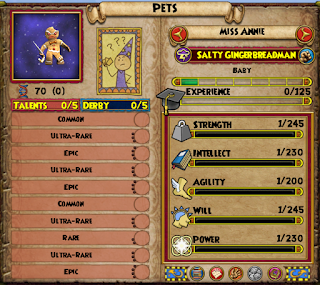 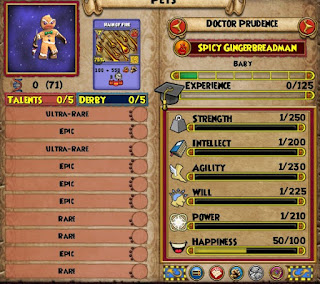 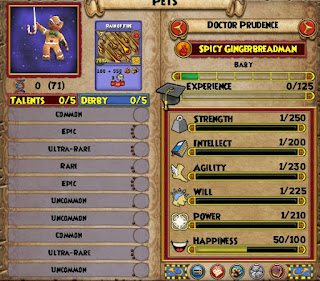