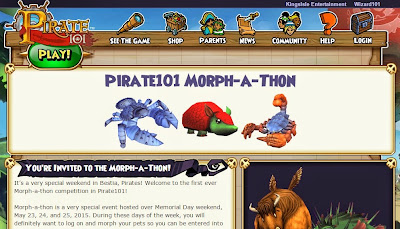 Notice the pets in the header? They must be new hybrids that has not been found yet!

It’s a very special weekend in Bestia, Pirates! Welcome to the first ever Morph-a-thon competition in Pirate101!

Morph-a-thon is a very special event hosted over Memorial Day weekend, May 23, 24, and 25, 2015. During these days of the week, you will definitely want to log on and morph your pets so you can be entered into a grand drawing!

Here’s how the drawing works:
*We’ll be internally tracking all pet morphs made during this event. Make one morph, and you’ll be entered automatically.
*For each morph you make during this event, you will be given one entry into our drawing, e.g., Morph 20 pets, get 20 chances to win. Morph 50 pets, get 50 chances to win!
*For each specialty hybrid pet you make during this event (pets you can’t obtain any other way than morphing, like the Grimtooth Reaper shark), you will be given a bonus entry into our drawing! (NOTE: The Skull Island Macaw, (Blue) Ostrich, and Tarantula do not count as hybrids for this competition.)

Any players who create a morphed pet during this time will be entered into a special drawing for a grand prize of 60,000 Crowns or one of ten prizes of 10,000 Crowns!

2- You may sell your pets or place them in your house after you acquire them.
3- Winners will be awarded on May 26th, 2015 on announced that same day on the KingsIsle blog (we’ll also be sharing if any new undiscovered hybrids were discovered during this event).
4- You may only win once per account.


I highly recommend that you guys go sink some ships or raid the Moo Manchu tower to get all of your characters filled up on gold! Don't forget those group chests too!

Here are a few hybrid theories to get you started!

Any Christmas Pet with an Armadillo Verde? 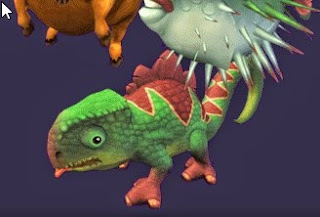 This one should be a new hybrid. I know I've seen this picture being around for a long time, but nobody has found this yet. 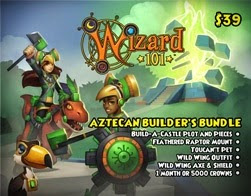 This brand new bundle is now available at GameStop for $39.
It comes with its own Arcane House, but with the Azteca look. It also comes with a super cute raptor mount and an unbelievable toucan pet that you will have to have! Of course, as always, it comes with a fantastic new gear and wand along with a shield. 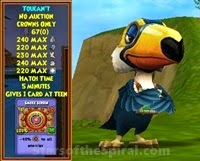 You can't tell me that they aren't cute!! 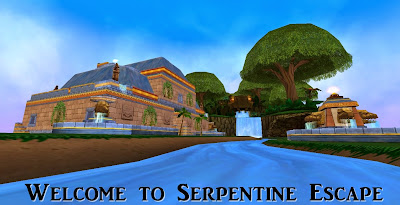 The house is called Serpentine Escape. It's also an Arcane House, so that means you can tear the houses down and rebuild it into your wildest fantasy! The house even includes beautiful fountains. There are secret rooms and passageways. It's a house that acts like a maze. If you go in, you might not get out. Even a friend said, "This is a house I can easily get lost in!" 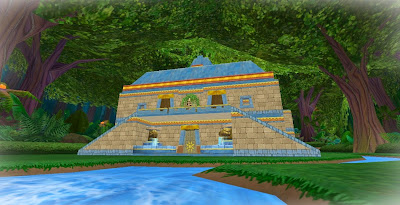 As always with each arcane house, there's one outside and one inside that's reachable by going through the waterfall. The looks of the houses are just simply amazing. "Oh look, the doors open and close on their own. So cool!" one remarked. 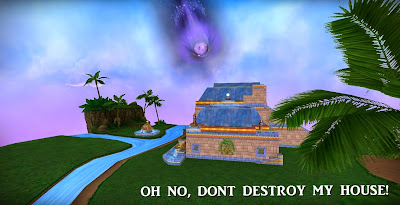 It even comes with its own meteor that will always be threatening to bulldoze your arcane house.
"Uh-oh," we all said. 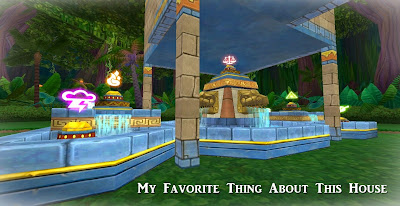 This was easily my favorite thing about this house. The amazing symbols here.. Wow, I can easily see this as majorly collectible in-game. I sure hope that they will be craftable. Alexander Lionheart was already at the Bazaar hoping that there was an Ice symbol sold there, so he could have it. That's how bad he wanted it.

Gary who works at KingsIsle and is one of the people who review and test houses thanked Paige Moonshade and his own daughter for building the Serpentine Escape houses that comes with the Aztecan Arcane Builder bundle. If you loved the houses, it was their own design!

Wizard101 sure did a great job with this bundle!

By the way, while looking at the Toucan't slots, the pet HAS to have something new, don'tcha ya think? Everything is a Ultra or Epic. It has only ONE Rare talent. 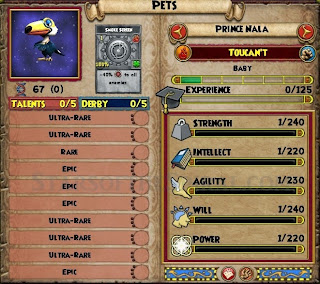 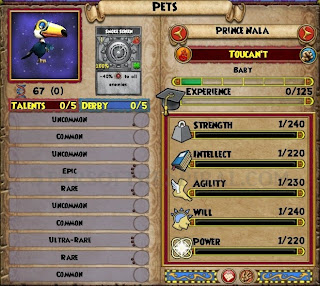 The Gear and Wand Look/Stats

Alexander Lionheart was raving about the wand in this bundle. It sounded like it could be super useful! But here are all of the stats so you can decide for yourself. 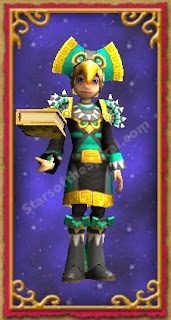 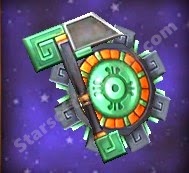 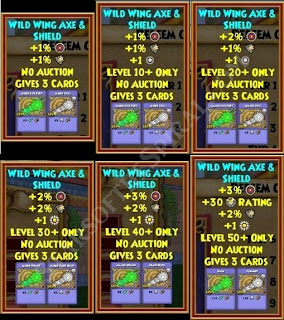 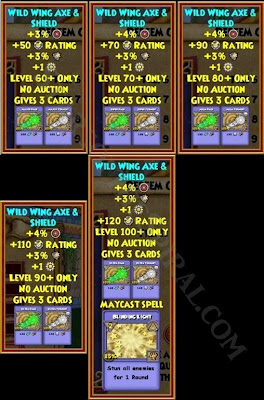 The following pets were not around in 2011 when this post was originally made, but thus far has been discovered! 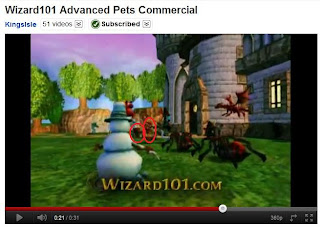 In this video from 2010, a Fire Elf is hopping around next to a regular Scarab pet at 20 seconds!

And now the balance Scarab and Fire Elf is NOW DISCOVERED. 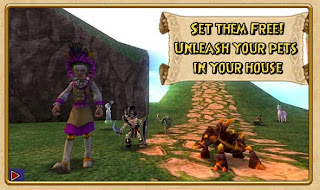 In 2011, we noticed the Armored Skeleton pet? It's right next to the Fire Beetle,
Interesting, isn't it? And now BOTH of them exists! 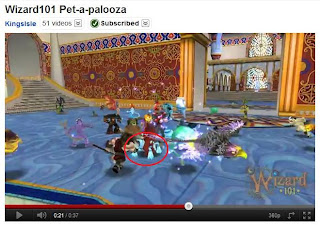 I said in 2011: "Storm Bird was given to a player who lost items or for some glitch.
For some reason, Wizard101 decided to take it back,
so whoever had it don't have it anymore.
However, Wizard101 called it a "Crafted" Pet
which leads me to think that it's a Hybrid.

I don't think it hurts to try to make a Storm Bird since
there is a Fire Bird and a Ice Bird."

I said in 2011: "There's NO pictures of this pet. Just rumors that it was seen in Test.
HOWEVER.. this pet HAS to exist in my opinion because there is..
Death Bat, Life Bat, Fire Bat, Storm Bat, Blood Bat/Fang Bat (both are Myth)
So the only Bat that is missing is Ice and Balance.
Makes you think, doesn't it?" 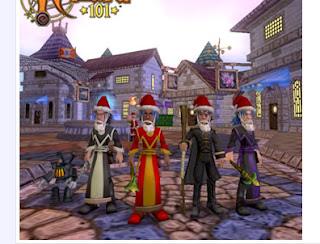 My Favorite Undiscovered Pet So Far, the Steel Golem!

Some people say that the Steel Golem pet is a KingsIsle staff pet. I totally disagree. I do not believe that KI would be so callous to post a picture of an awesome pet knowing that children CANNOT get it. So therefore, it does exist, but is simply undiscovered. It is also listed on the Age Conversion List which proves my point that it HAS to be in-game or just not released yet.

As for a few days ago, Gary who works at KingsIsle has stated that this pet is planned to be used for a future game card. When, we do not know. I hope it is soon since this pet has been missing for FOUR years. 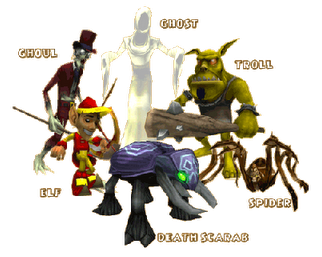 As of Today, all pets in the promo pet picture has been discovered except for the Ghost. Some people say they think the Ghost is actually the Yellow Ghost which already exists in game. But others think it's a WHITE ghost. What ya think?

Okay, we all know about Fire Beetle now. But at the time this video was released, the Fire Beetle did not exist. Not until I personally discovered the combination to create one. But people have always suspected that the Gobbler in this picture is NOT the regular Red Gobbler, but an Orange one. If it's a different gobbler, I can imagine it to be a Fire Gobbler or Balance Gobbler? The RED Gobbler pet pretty much says it's a RED gobbler. Why say RED unless there are other colors that exists? Could there be an Orange Gobbler? What about other schools? Imagine a Death Gobbler, all black? The possibilities are endless.

A few years ago, Lydia Greyrose made a post
listing all of the pets whose age would be converted once they went to live.
So this list gives great clues on which pets are still missing.

TIPS ON HOW TO FIND HYBRIDS

Here is the method I have used that I was able to get a Fire Beetle from.

When mixing for a brand new pet,
you MUST use a pet that LOOKS like the pet
and a pet that could force its school upon the other.


FOR EXAMPLE:
You cannot get a Ghost from Helephant and a Snake.
That doesn't make sense.


If you need a Storm Bird..
It makes more sense to use a Ice or Fire Bird for looks
then a Storm pet for its school.
PRESTO, a Storm Bird!


If you don't have a clue what school the new pet could be,
try using a pet that might has something the other needs.

I hope this helped! This is how I discovered the Fire Beetle.

Wizard101 has been releasing hints on Hybrids in-game. They said there's over 100 undiscovered hybrid combinations. Here's their three confirmed combinations they have stated on KI Live.

Then in their Wizard101 Newsletter, they released six combo hints. I have added the confirmed hybrid results if it is known leaving two mysteries as a mystery still in what they produce.

As said in the Wizard101 Newsletter:
"For those studious Wizards of the Hatchery, below are a few more hints for combinations that may produce unexpected results. Remember, hybrids can be rare so if you don’t get it the first time, don’t give up. Good luck, Wizards and happy hatching!"

I gotta say though that I'm disappointed with the hints so far. They simply produce other pets that ALREADY exists. I was hoping for brand new pets that does NOT exist.

For Pets We Have Seen In Videos and/or Pictures

For Other General Pets

Have you always wondered if some pets you have could come in another school version?

Bats - We have Fire, Myth, Storm, Ice, Death, Life that there's no Balance, which should be added to the list.

Crows - There's Ice, Fire, Storm, Death (Dark Crow). So that makes me think that there should be Myth, Balance, Life birds.

Ghosts - Since there's now blue, yellow, red and green ghosts.. I'm starting to wonder if there's orange and purple in addition to the white one that was a promo pet. I am still trying to think what other pets we should keep an eye on.

Death Hounds - There is a Death Hound, Ice Hound, Fire Hound - all with ONE head.. I do not know if the Orthrus mixes counts as Hounds.. But what about Balance, Myth, Storm, and Life?

Scarabs - We have Life, Death, Balance, but no Myth, Fire, Storm, Ice. Gosh the list goes on and on!

But, what pets do you want to see now? Do you think there SHOULD be a complete "school" versions of all pets listed above? Do you want more secret hybrids that you only can get through hatching? Let us know by leaving us a comment.