The Ultimate Guide To Monstrology 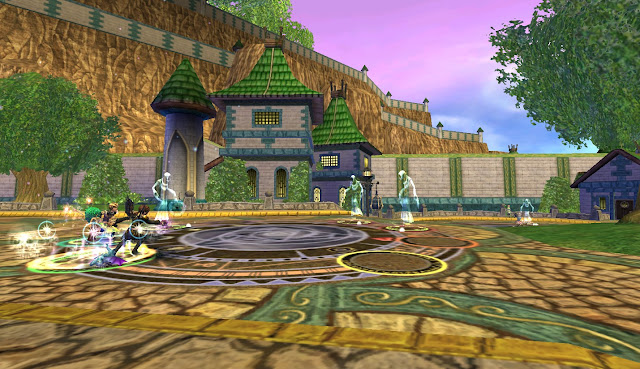 Wizard101's Test Realm is now open with brand new features. But I'm here to explain about the biggest feature that you will be soon receiving in the Live Realm!

The biggest feature in Test Realm is Monstrology. What is Monstrology you ask? Let me explain. You get to fight monsters with new spells called Extracts. It's pretty much Extract Animus spells. 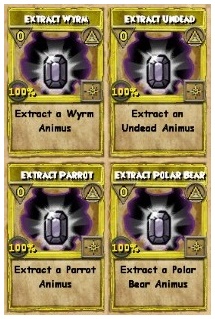 There are four categories you can draw animus from - Undead, Wyrms, Parrots and Polar Bears.

Starting in Wizard City, Monstrologist Burke in Ravenwood will give you the Extract card for Undead monsters for free as long as you are level 12 and up. 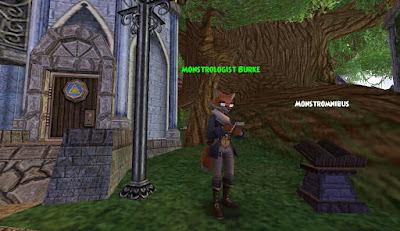 You can find him in Ravenwood, by the Myth Tower. There's also a tutorial tome next to him if you need to review the Monstrology tutorials again.

To get started, you will be sent to Unicorn Way to defeat Undead monsters with a new quest, "Know Thine Enemy," from Monstrologist Burke. What about the Parrots, Wyrms and Polar Bears? That's for later worlds. Why? I will explain later. Let's focus on Undead monsters. 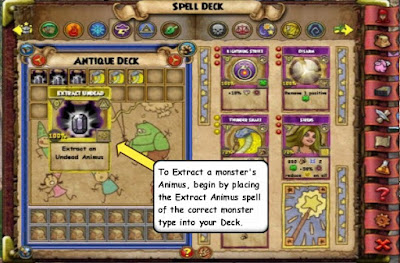 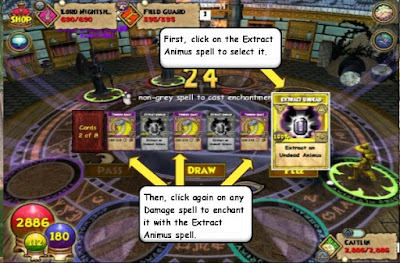 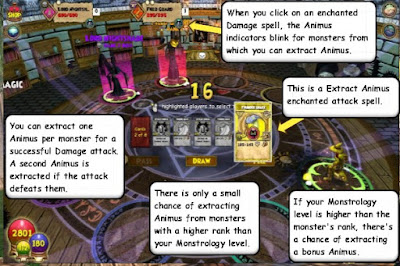 If you hit the monsters, and you do collect animus, but lose the battle, you will lose the animus you have collected. You must WIN it in order to actually keep it.

You will know that you have collected Animus if you see an icon under the monster's name as well as under the cards. The image below shows you where. 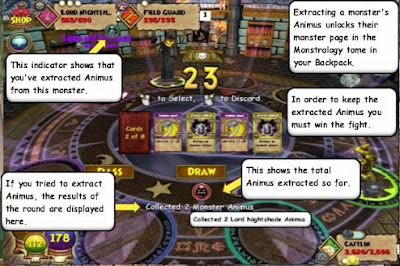 Once you collect an animus from a monster in ANY world, it will instantly show up in your Monstrology Tome. Just press T. 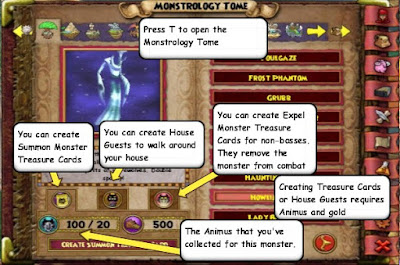 The cool thing about Monstrology is you can do three things with the monsters you've collected animus from. You can make Summon treasure cards out of the monsters to fight in your own Monstrodome, you can create house guests for them to roam around your house or best of all, to remove the monster from combat. Although that's only for non-bosses. Personally I'm most excited for house guests.

But you ask what is a Monstrodome? Well, it's your own private gauntlet that you can place in your house where you can summon any monsters you have collected as long as you got the Summon treasure cards. You can make Malistaire show up or any monster show up, so you can fight them in your own pvp ring in your Monstrodome. Super cool, I know. 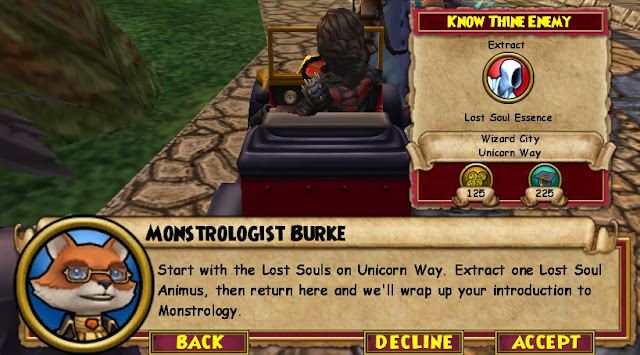 When you are just starting out, you will be instantly given the Rookie Monstrologist badge. What does this mean? 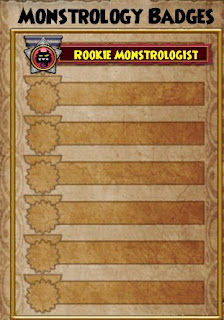 It's your Monstrology level. You see, you not only collect Animus, you also collect Monstrology XP. The XP will help you level up in Monstrology.

As you can see, I collected 2 Monstrology XP when I defefeated Skeletal Pirates.

Yay, I gained a new badge and rank! 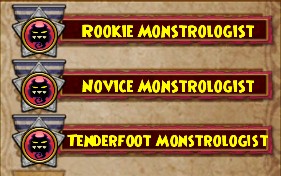 As I climbed up the ranks of Monstrology, you will keep gaining levels and badges. If you press C and click on the Activities tab, there's a new space for Monstrology XP on Page 2. This will keep you on track of which level you are at. Last I heard, the highest level someone was able to reach was 17! I am assuming that there are at least 20 Monstrology Levels? We shall see. 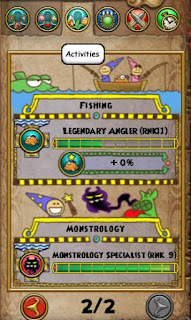 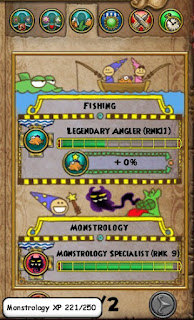 Hover over the Monstrology XP Bar to see how much you need to reach the next level. 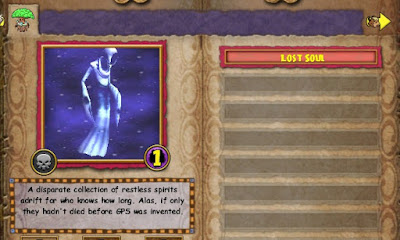 You can see this Lost Soul has a number 1, that's its rank. If you are Rank 1 Monsterlogist, you sure can collect animus from this Lost Soul without any problems haha. Once you fight other monsters in other worlds, new world tabs will show up. Don't worry about that. 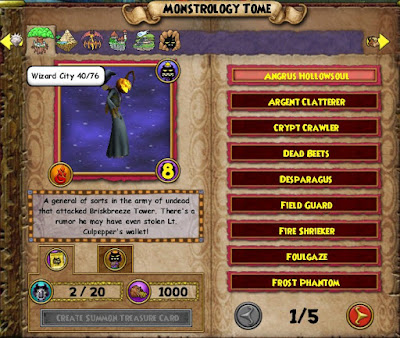 One of the things that if you ever wonder how many monsters total in each world that you can max out on. If you hover over the Wizard City tab, it will show you a number 1/76. It means the available of Animus Monsters will be in that world is 76. Be advised that some worlds will have two kinds of Animus Monsters, for example, Azteca could have Undead AND Parrots. And yes, both will show up under Azteca. Please be aware of that.

This doesn't just count monsters in worlds, but monsters in gauntlets like Baddle of the Bands and Tanglewood Terror. For example, Tanglewood Terror has monsters that are considered Wizard City monsters. So, don't also forget to try the Rattlebones, Krokopatra, Meowiarty and Zeus Duel gauntlets. Monsters during events such as B.O.X.E.S., Lost Pages, Nosferabbit's Cave or the Halloween Towers. They all also count as well.

One of the things I loved about Monstrology is the HILARIOUS description of the monsters you collect. Some people collect just to read the descriptions haha.

Now for your next lesson... 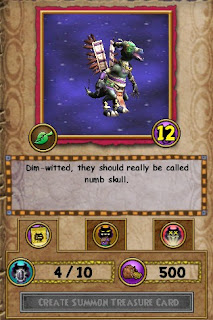 For instance, this monster is Rank 12. Remember, you should be Rank 12 Monstrologist to be able to collect animus. I was lucky to collect some from him, even though I was Rank 9. But it took two battles.

Once you're ready for high level Animus Monsters, you can buy new Extract spells from Monstrologist Burke. You can't collect Animus from Parrots if you used an spell enchanted with the Extract Undead spell on them. Extract Wyrms only for Wyrms. Extract Polar Bears only for Polar Bears. Do not forget to fix your deck if you are changing your monster target. 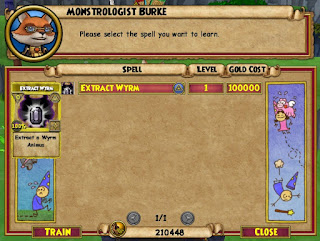 This one was in Caliburn, Avalon. There's no level requirement, but it will cost you deeply. 100,000 Gold! All of the extract spells other than the Wizard City's Undead spell costs a cool hundred grand gold coins. 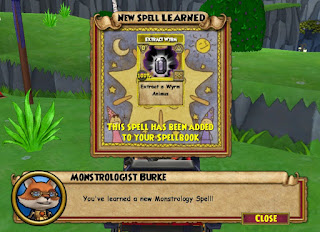 Yay, time to go and defeat dragons.. I mean Wyrms!

Remember, if you want the Extract Parrots spell, you will find Monstrologist Burke in Azteca and for the Extract Polar Bears in Polaris.

To get you started on Undeads, here's a Guide to most Undead monsters that we have found. We are still working to complete it as well as create guides for Wyrms, Polar Bears and Parrots.

Any questions, please feel free to ask me, so I can update this guide and answer your questions! Good Luck!

The Master Monstrologist List: A Complete Guide To Animus Monsters


This guide is still in progress. What I am doing though is making a master Monstrologist list, so you can look from a glance which ones count towards your world count.

For instance, if you hover over the tab of the world icon in the Monstrology Tome, you will see a number. It will say 1/76 for Wizard City. This means 76 unique Animus monsters to discover in this world alone. Animus monsters meaning any Undead, Parrots, Polar Bears and Wyrms. Some worlds have two kinds of Animus monsters.

If you guys can help, that would be great. It would be faster with everyone chipping in with their information to make this guide more complete. And of course, you will be credited under Guide Helpers in this post.

**5 Monsters Missing**
Could be 4 if First Guard was added


There are three sets of Monstrology Badges in the Test Realm. We have listed all of them for you so you can be ready when they are added to the Live Realm.

This guide is still in progress. Please be patient with us. If you have information that we are missing from this guide, please let us know. We will credit you of course.

Found under Wizard City, there is now a new badge for defeating 4000 Undead Monsters.
We still haven't found out what it is!

Second set is the Monstrologist XP badges. There are ten of them and they are found in their own section under the badges tab.


And more left undiscovered! We will add more once we find them.